If you have ever wanted to travel back in time and your DeLorean is in the shop, I suggest taking the elevator at the JetBlue Terminal at JFK airport in New York, where you will find two buttons— “1960s TWA hotel” and “Present Day JetBlue.” Do yourself a favor and push the top button, exit the elevator, and walk down a long flight tube with red carpeting to the TWA hotel lobby. And for your listening pleasure, a soundtrack of the hits of the 1960s and 1970s plays throughout the public areas. 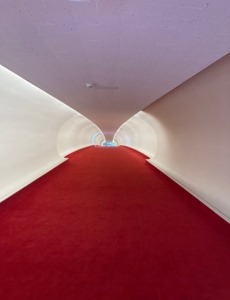 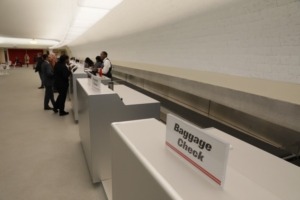 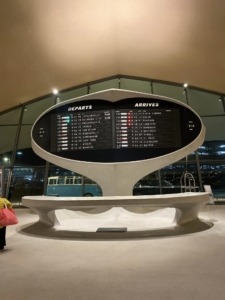 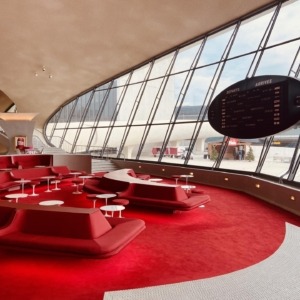 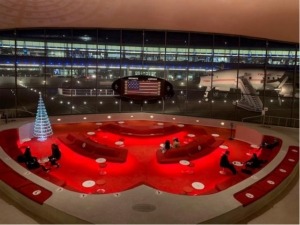 I visited this groovy hotel (is there another word to describe it?) for a few days at a staff retreat. According to the website, the TWA Hotel was restored and reimagined from the original TWA Flight Center (terminal). At check-in, the staff was dressed in flight uniforms, and the desks looked like you would expect in an airport terminal, complete with a place to weigh your suitcase and a conveyor belt to whisk it away. Fortunately, the computer system was upgraded to 21st-century technology, and I was able to self-check in.

While I waited for my room to be ready, I went exploring. First, I  learned some TWA history: 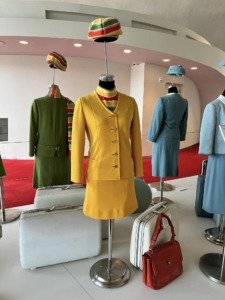 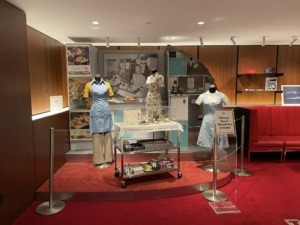 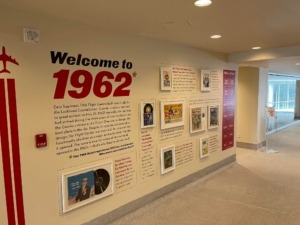 Then, I checked out a game room that I’m sure no other hotel has available—the Twister Room. Too bad I didn’t have time to play a game. My room was ready. 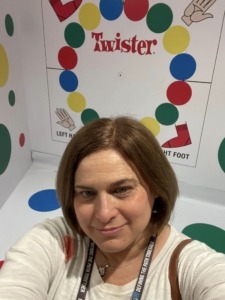 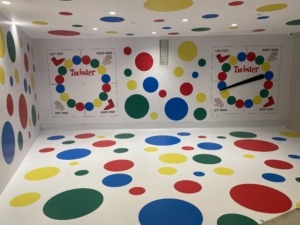 Unfortunately, I didn’t get too many photos of my hotel room but think red furniture, rotary phones, and this runway-style bathroom mirror. 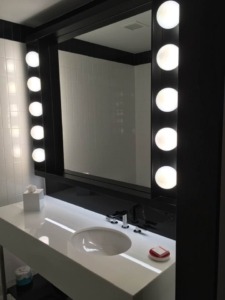 After a long day of meetings, we relaxed in what’s called the “Connie”—a 1959 Lockheed Constellation “Connie” airplane turned cocktail bar. 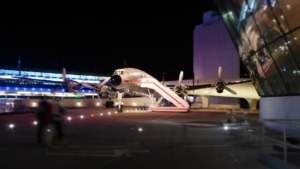 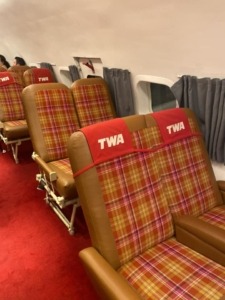 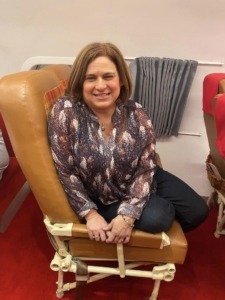 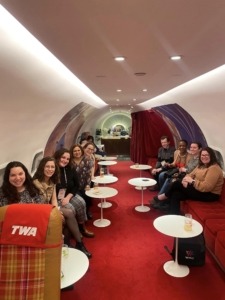 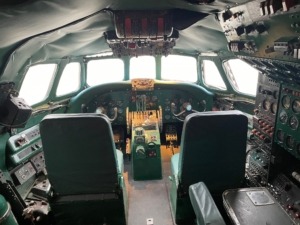 This was a fun place to stay for a team-building event, a quick get-a-way, or a pit-stop on the way to fly somewhere for vacation. The food was delicious and served in branded glasses. The TWA shop has something for everyone with the TWA logo on it. All of the staff treated us as if we were flying the friendly skies. The only complaint I have is that my room was facing the Jet Blue arrival/departure terminal, where I heard people coming and going all night long. So, if you are looking for nostalgia, you are in the right place, but you won’t get the best night’s sleep.

“Your path at 22 will not necessarily be your path at 32 or 42. One’s dream is constantly evolving, rising and falling, changing course.” – Conan O’Brien’s Dartmouth Commencement speech 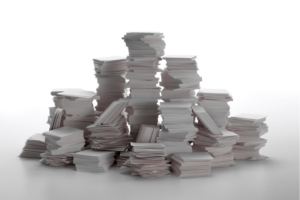 Recently, a trusted friend advised me to remove my first job from my resume. He said it aged me and didn’t add anything to the current iteration of my career. Of course, he’s right. Being an editorial assistant in the mid-90s at a publishing company that no longer exists doesn’t speak to where I am professionally today. But before I delete it entirely from my LinkedIn page and resume, I want to pay homage to that job.

Saunders College Publishing was a division of Harcourt Press and mainly put out math and science textbooks. When I was first hired, my family found it ironic that I’d be working in the math department because I went through hell to earn Bs and Cs in my Algebra II and Geometry classes in high school. But my job in the editorial department had very little to do with math and everything to do with publishing. As an editorial assistant, I supported four editors and saw countless textbooks through the editorial process. I secured and paid reviewers, updated authors with status reports, prepared manuscripts for the art department, and often weighed in on different options for book covers. Somewhere in the world, there is a calculus textbook with my name in the acknowledgments section praising me for a job well done.

I still remember the job interview where I felt I hit a home run with all four editors. My boss, Alexa, and I were big readers and shared a love of historical fiction. Anita had my father as her social studies teacher back in the day. Mark was a die-hard Phillies fan like me. And Terri and I graduated from the same university. GO RAMS!

All of the assistants working at Saunders were recent college graduates. I was excited to see my old friend Caren at one of the desks. We went to West Chester and worked on the student newspaper together. She introduced me to everyone and showed me the ropes. Our building was right by Independence Mall, and we often ate lunch in the park with the other assistants. Besides complaining about our bosses, we also placed frivolous bets on who would be promoted or get engaged next. For a while, there was a string of engagements, including my own, and mornings would be wasted as diamond rings were shown off and wedding planning tips were exchanged.

Besides hanging out with my work friends, I grew quite attached to the large copier in the mailroom, but strictly on a professional level. We had a love/hate relationship. Most of the time, the machine was well-behaved as it spat out several copies of 200-page manuscripts. (We killed a lot of trees back then). But eventually, the Xerox machine would throw a tantrum like a child that no longer wanted to cooperate with its mother. I spent hours in that mailroom begging and pleading with that copier to keep working. When it refused, I pampered it by changing its toner, switching out ink cartridges, and unjamming sheets of paper from mysterious locations deep inside the machine. As I said, we got to know each other well.

Outside the office, I experienced some history in the making. I shook hands with Governor Bill Clinton at a campaign rally behind Independence Hall before he was elected President. And we all gathered around to listen to the news report when the O.J. Simpson verdict came in. And our building was once evacuated after a bomb threat was called into the ATF office a few floors down. In the stairwell, people were crying because this happened shortly after the Oklahoma City bombing. Being on the 12th floor, it took forever for everyone to reach street level, where police and firefighters instructed us to run away from the building. A bunch of us hugged in the park once we realized everyone was safe.

One of my first visits to the west coast was a business trip where I sat with dozens of math teachers to learn the “new math” coming out of Mt. Hood, Oregon. I don’t remember much from that trip except the feeling that I might have done a much better in Algebra and Geometry if this teaching method had existed back then.

Finally, it was time for me to move on. I grew tired of my boss asking me to “fetch” things for her. I thought that verb was more appropriate for her dog than for her assistant—and I wasn’t sure if she always knew the difference. It was time to break up with the Xerox machine and leave my friends behind for a new role at another publishing company.

And now, thirty years later, it’s time to leave Saunders behind again. You are officially off my resume, dear friend, but you will never be away from my fondest memories. 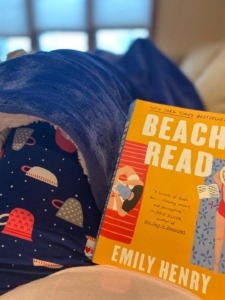 The rarest and most precious of weekends are those when I have no plans and can spend the entire day however I please. Take today, for instance.

I woke up at 8:30 am and stayed in bed until 9. I sunk into my favorite spot on the living room couch, savored my coffee, and enjoyed the view from my bay window. It was cold outside, but I was nice and warm indoors, sporting my best flannel pajamas. I am about a week behind on the Ultimate Blog Challenge because I had COVID and then a three-day work retreat out of town. I’m sure I won’t catch up to everyone else in the challenge, but I’ll do my best.

With that thought in mind, I sat down at my laptop with my second cup of coffee and started writing seven pages of total crap. Okay – not total crap, but nothing worth posting yet. 🙂

I walked away from those pages and opened another document. I’m taking a writing workshop and wanted to finish providing feedback on another person’s manuscript. After that, I completed my submission for the workshop and sent it out to the group. Needing a little more feedback, I sent my piece to my sister and two good friends for honest reactions and extra support.

Then, I went on to my next writing project—my Trader Joe’s shopping list. Butter chicken and Naan. Sesame seed bagels and lox with the Everything Bagel seasoning. And Hold a Cone ice cream for dessert. It was probably the best thing I wrote all day.

And then, I returned from food shopping with the full intention of getting back to writing. But I cleaned out my email inbox instead. I’m a loyal subscriber to a few dozen newsletters, but I’m no help to their open rate. I ignore so many of their emails that are chock-full of the inspiration and motivation I need to keep going. I dove into my inbox and drowned myself in writing advice.

Now, it is two hours later, and I haven’t written anything else today (except this blog post), but I’m feeling recharged and focused on the tasks at hand. I should really get moving. But I have dinner plans tonight. So stay tuned for another blog post and much more where that came from starting tomorrow. 🙂

I hope you enjoyed your Saturday. 🙂