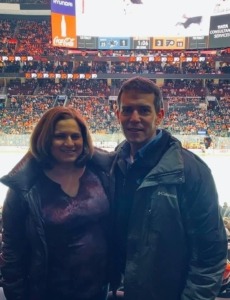 It has been quite a year, hasn’t it? I know because the Facebook memories that pop up for me lately are quite telling. In January, my entire family went to dinner to celebrate Jenna’s birthday. The following month, we did it all over again for mine. At the end of February, Scott and I had box seats at the Flyers game. We sat at center ice and marveled at how we could see all the action right in front of us as the wait staff served us beer and sandwiches. Basically, we enjoyed how the other half lives.

I’m pretty sure that was the night I got COVID. I still remember sitting elbow to elbow with fellow hockey fans. We screamed and shouted into the crowd at each goal and penalty. Exchanging high fives with strangers was the norm. We passed everyone’s food down the aisle and then passed cash back to the waitress. It was definitely not a social-distanced event (not that it would have been at that point).

At the beginning of March, I was sicker than I had been in my entire life. While I was never officially diagnosed with COVID-19 (because testing was not easily accessible early on), I had a nasty cough and congestion, awful headaches, no sense of taste or smell, and total exhaustion. I could barely speak on the phone with my family and friends because my voice was shot. I just slept and coughed and tried to do all the things that needed to get done. It took me three weeks to fully recover, and because I didn’t have shortness of breath or a high fever (thank goodness), this probably would be considered a mild case of the virus.

As the outside world shut down and the kids switched to online learning, and no one knew what to believe; I wrote this in one of my blog posts:

Not much has changed. And little did I know that it would be a year before any of us would start to see the light at the end of the tunnel.

The vaccine is now available, and because I’m nowhere near my goal weight right now, I’m eligible. And after weeks of trying to get an appointment, I found out yesterday that it was my turn to receive the first dose.

I’ve never seen so many people happy to get a shot in the arm. It was easy to see the big smiles behind the face masks. People took selfies with the medical staff and in the observation room. There was finally some joy to be had by all.

Soon, we will all be able to hug our friends and family, eat out instead of takeout, go on vacation, and celebrate milestones in person. For the first time, my world felt a lot brighter.