Home » LWOAM » The Book vs The Movie 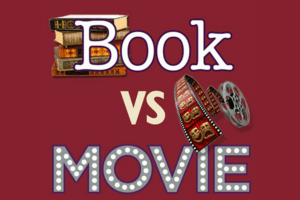 I used to be excited about going to the movies. I went all the time as a kid. I loved the big screen and the candy. And it was great to go every year on December 25 because my family celebrated a Jewish Christmas. The movie theater was the only thing open, and my friends were all there. We could hold a minyan if we wanted to because the entire congregation – including the rabbi – filled up the seats.

Now, Christmas is a big movie release day, so it isn’t just for the members of the tribe (MOTs) anymore. But back then, it only cost $4 to see the latest feature film. You could take your entire Hebrew school class and see every movie in the theater for less than $25 plus the cost of popcorn. And then, we would all go out for Chinese food afterward.

As a teenager, I went to the movies almost every weekend. It was a little more expensive, but my dates usually paid. Now, as an adult, the experience is not as fun anymore. The previews are endless. People look at their cell phones instead of watching the movie (not me, of course). And even though I’m fully vaccinated, I don’t want to be in a crowded theater. I have perfected the art of watching films in the comfort of my living room. I can even pop my own popcorn and save a lot of money.

But, the number one reason I’m not interested in going to the movies is this: the book is always better. I mean, thank G-d for the wonderful actors that are cast in these roles – like Octavia Spencer in “Hidden Figures” or Tim Robbins and Morgan Freeman in “The Shawshank Redemption.” I admit they bring the characters to life in ways that I enjoy. But even the best film directors can’t possibly capture all the intricate subplots and themes in two hours. I give them plenty of points for costumes and cinematography – but the story almost always suffers, especially the endings. (SPOILERS AHEAD)

In “The Devil Wears Prada,” the assistant Andi gives Miranda Priestly precisely what she deserves in Lauren Weisberger’s book, and it’s AWESOME! But, in the movie, not so much. The ending pales in comparison and neatly tied up in a bow. Disappointing!

Same with “Crazy Rich Asians.” I’ve watched the movie several times because it is a good story, But Astrid and Michael have a great storyline that is never fully realized in the film. And the relationship between Rachel and her potential mother-in-law does not end as well in the novel as on-screen.

And don’t even get me started on the ending to “Gone Girl.” I can’t even… If you’ve read the book AND seen the movie, you know what I mean.

When you think about it, the book costs around $16, which is about the same price as the movie (depending on where you live). Rationally speaking, why would I spend that money twice on the same story? As a side note, I never by the book with the movie poster on the cover. I refuse to feed into the marketing of the film and carry it around like a mini-billboard.

So, perhaps it isn’t the sticky floors or the endless previews that I dread at the theater. More likely, it is that I am often so disappointed. Call me a book nerd, but I can’t help but shake my head and wonder why I wasted my money and my time.

Are there any movies you liked better than the book?

5 comments on The Book vs The Movie