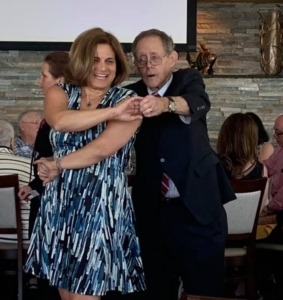 April is Parkinson’s Disease Awareness Month. It’s difficult to shed a light on a disease that resembles all the typical signs of aging like walking slow, having tremors or falling. But, Parkinson’s Disease, or PD, is so much more. It is a progressive neurological disease that has no cure. It’s a movement disorder that occurs when the brain cells that make dopamine – a chemical that controls movement – stops working. In addition to movement, people with Parkinson’s can also experience other physical and psychological issues.

More than 50,000 people are diagnosed with PD every year ane each person’s experience is unique. Some people experience minor symptoms that can remain that way for a long time, while others deal with more advanced problems. There are medications to ease the symptoms and improve quality, but again it’s not a cure.

How do I know so much about this? I have two special people in my life diagnosed with PD. I often think of my grandmom, Elsie, who swam every day at the pool in West Palm Beach, played pinochle and gin rummy with my grandfather and doted on her grandchildren while enjoying her coffee and Pepperidge Farm Milano cookies. After her diagnosis, it was jarring to watch this once vibrant woman slowly and strategically maneuver her walker around her living room. Over the years, her voice became much softer, she had stiffness in her limbs, and her ability to attend family celebrations was challenging to say the least. She fought PD for a long time and experienced other complications which led to her passing.

Today, I watch my dad fight PD. For as long as I can remember, my dad has always been on the move and never one to sit still for long. As a middle school teacher, he used to sprint up and down the stairs as fast as his students—faster if he was running late. He bowled frequently, rode his bicycle and enjoyed the outdoors. At parties, he and my mom could typically be found on the dance floor. To this day, they can still cut a rug which is a joy to watch and is, coincidentally, a highly recommended form of exercise for PD patients.

His PD symptoms are completely different from my grandmother. His PD presents itself as tremors in his hands, shuffling his feet as he walks and sometimes losing balance and falling—which has happened on one too many occasions. In public places, he uses a cane as a safety net, but he doesn’t let it stop him from living life to the fullest. Recently, he and my mom went on the trip of a lifetime to Israel. They have a national parks tour scheduled for later this year.

I’ve come to recognize PD in celebrities before they announce their diagnosis to the public. I once heard former Philadelphia mayor, Ed Rendell, speak at our synagogue, and I knew what he was facing by the way he walked to the podium and his mannerisms. I hate being right about these things.

As the daughter and granddaughter of two people affected by this disease, I am doing my due diligence so that everyone can continue to make their dreams come true despite their illness. I donate to the Michael J. Fox Foundation regularly. I’m considering joining a research study since I am part of a high-risk group that may or may not develop it in my lifetime. But I am still thinking about it. I honestly don’t know how I would react to the results. But that’s a story for another day.

In the meantime, I’ll continue to raise awareness and funds to support those who are diagnosed early in life like Michael J. Fox at the age of 29, and my dad who inspires me in so many ways.

If you would like to help fund important research to find a cure or support organizations that offer exercise programs and support to PD patients and their caregivers, consider donating to the Michael J. Fox Foundation or your local PD charity. In the Philadelphia area, I recommend the Parkinson Council.