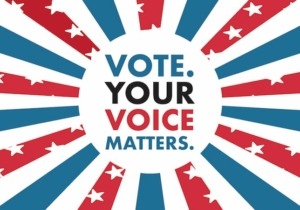 Last year, my husband and I sat at a local restaurant celebrating our anniversary. We enjoyed the live music, the delicious food, and a rare moment of spending time together during a rather busy time in our lives.

It would have been a wonderful evening if it wasn’t for the party at the next table. Instead of focusing on our conversation, I couldn’t help but listen to the gentleman who was ranting about the “rigged election system” and then proudly (and loudly) proclaiming: “I’ve never voted in my life!”

He went on to say that his vote doesn’t make a difference and that all politicians are crooked. He boasted that he can’t be bothered listening to the news and would rather be blissfully ignorant and go on with his life than get involved.

I saw his children sitting next to him, hanging on to his every word. I couldn’t help but think about how sad it was that this moment would likely mold their own attitudes toward involving themselves in our democratic process. I wanted to get up and yell at him. I’m sure others around us felt the same way.  At the very least, I wanted to tell him to shut up because he sounded like a complete idiot.

Across from me, my husband took my hand and looked at me as if to say—it’s not worth it.

Yes, our system is not perfect, but that doesn’t mean we should cease from participating in it. Don’t people realize that their laziness and ignorance contribute to the rise of a dictatorship? Do we really want to give up individual freedoms because we don’t want to be bothered by educating ourselves? I know that’s what many politicians–including our president –count on. But it is always my hope that we prove them wrong.

For the record, yes, I’m a Democrat. I believe in a woman’s right to choose and passing reasonable gun control laws. I believe in a free press and an independent justice system. I believe in regulating companies so that they don’t destroy our planet. I believe immigrants are an important and beautiful part of what makes America great. I believe our DACA children should be given a fair and respectful process toward citizenship instead of continually fearing deportation. And that’s not all, but I’ll leave it there.

I have friends and family who are Republicans. Some are fans of #45, and some are not. And because their friendship is so important to me, we get together and don’t discuss politics. Our opinions may be radically different, and that’s fine with me. I’m just happy that they are a part of the process. I want their voices to be heard just as loudly as mine. And although we may disagree vehemently, I refuse to give up a friendship because of it.

In this country, we are permitted to have our own opinions. In some countries, people are punished for expressing themselves—politically or any other way. If you want to block out what is going on in our current political climate, that’s your choice. But, please don’t brag about it—especially to your children. Let them make up their own minds.

Our future depends on it.

5 comments on Getting Political