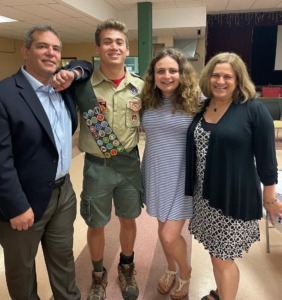 They say a picture is worth a thousand words, meaning many ideas can come from a single shot. So, I thought I’d give it a try.

This family photo was taken at Andrew’s Eagle Scout ceremony a few weeks ago.

When Andrew was in the second grade, he told us he wanted to join cub scouts. He attended a school assembly and learned several friends were already part of the den. I admit that my first thought was – how will I squeeze scouts into our already packed schedule? Between piano lessons, swim practice, soccer games, homework, and Hebrew school – and working full-time – I didn’t think I’d be able to take on one more thing.

Enter my husband, Scott, who agreed to take care of everything that involved scouts. He was interested in volunteering and understood the value scouting could bring Andrew. For the next ten years, scouts became a father-son activity that they both benefited from immensely. While Andrew learned about going camping, tying knots, and building cars for the Pinewood Derby, Scott attended den meetings, volunteer training programs, and numerous camping trips. Boy scout camp was challenging for us because it was the same week overnight camp started. Not wanting him to miss out on earning several badges at a time, Scott arranged for Andrew to attend both.

At the end of elementary school, some kids decided to give up scouting for other activities – but Andrew doubled down on his commitment. So much so that he made a pact with one of his best friends – also named Andrew – to see scouting through to Eagle. The two of them have been working side-by-side ever since. The boys didn’t realize it at the time, but their pact brought our families closer, and we took great joy in celebrating both of them that day.

During the ceremony, I received the mother’s pin in recognition for supporting Andrew in reaching this milestone. While Scott was the designated parent for scouts, I was cheering him on the whole way. I drove him to meetings and activities, volunteered for his Eagle Scout project (where he planted 120 trees at a local park), and washed his smelly and dirty clothes after long camping trips. (I knew my knack for doing laundry would earn me a medal someday).

At the Eagle Scout ceremony, it was wonderful to have all four grandparents, extended family, and friends in attendance. Our daughter, Jenna, took a break from studying for finals and came up from Maryland – where she is living for the summer. She wouldn’t have missed this moment for the world. Like his bar mitzvah five years ago, this is quite an accomplishment and a moment to celebrate with the ones you love.

And last but certainly not least, I want to talk about Andrew. As many of you know, Andrew is also a high school swimmer. He started his swimming career around the same time as scouts. When he joined the team, he noticed that a few kids sported mohawk haircuts for the season. He asked if he could have one too. This is how that conversation went down.

“Please! I want one so badly.”

“You realize that you are also attending summer camp and might be the only kid with a mohawk.” To which he said the following:

Oy! How could I say no to those seven memorable words? One could argue that he was following the other swimmers. But I say that he leaned into his team spirit and self-confidence. These leadership qualities swayed me to make the trip to Great Clips the next day.

If you have read this far, please allow me one more story about Andrew.

Besides joining the swim team and scouting in the second grade, Andrew simultaneously began speech therapy. You wouldn’t know it if you talk to him now, but back then, he had a significant word retrieval problem. He knew what he wanted to say, but his brain couldn’t find the words fast enough. He would often look up at the sky in frustration hoping the right words would fall from it. This made it quite difficult for him to express himself in the classroom and at home. For two years, he learned certain cues, broadened his vocabulary, practiced making eye contact, and embraced other strategies to help him speak his mind. At the end of elementary school, he received the class Citizenship Award and landed the lead in the school play.

Scouting provided him with a safe space to use his voice for the greater good. For his Eagle Scout project, he worked closely with the Parks and Rec department on the project, enlisted many volunteers, gave instructions, and continued to establish himself as a leader.

Recently, I learned that the highest award in Boy Scouts was originally called a Wolf Scout. This changed to Eagle Scout in 1911 with the redesign of the medal. As a marketing professional, I think this was a brilliant move on their part. To me, a wolf stays in the shadows, while an eagle soars. As Andrew graduates high school next week and starts Drexel University in the fall, my heart – along with the eagle – soars with pride. While he is leaving the nest soon, we are sending him out into the world as a strong leader, a thoughtful person, and a true mensch.