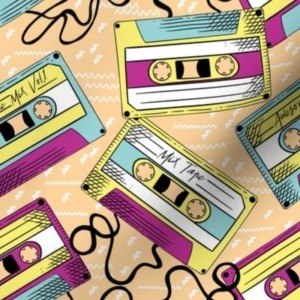 My parents were cleaning out their basement a few weeks ago and came upon a box of mixtapes from my ex-boyfriend. I felt a pit in my stomach that I hadn’t felt in a long time.

If they did listen, I’d be mortified. They would have heard countless professions of love from him to me, wanting to marry me and be with me, and there was plenty of not knowing what he would do without me.

I was sixteen. He was a little older but not much wiser at the time. I haven’t listened to those mixtapes in years and am baffled as to how they wound up in my parents’ basement. Maybe they found a secret stash I hid in the basement, although I don’t remember ever putting them there. I’m not surprised that there are more tapes than what I initially purged from my childhood bedroom. He made a mixtape for everything from first date anniversaries and birthdays to on-again-off-again breakups.

We went out for quite a while.

I have no desire to listen to them, but I can tell you what songs, singers, and bands he selected and the sentiments they imbued. He had impeccable taste in music that shaped my own (and I can honestly thank him for that). There’s plenty of Billy Joel, Elton John, Madonna, Bryan Adams, Chicago, Styx, James Taylor, Air Supply, Bee Gees, Toto, Starship, and his all-time favorite, The Beatles. He was the ultimate DJ of love ballads from the 70s and 80s love ballads, and he dedicated them all to me.

But it wasn’t all heavy-duty love stuff. He had a wonderful sense of humor and threw in plenty of comedy bits from George Carlin and cheesy songs like “Get Out of My Dreams, Get Into My Car,” “PacMan Fever,” “Mr. Roboto,” and whichever Weird Al Yankovic song came out that month. He was so adept at making these mixtapes both fun and flirtatious.

You could tell he enjoyed making these tapes, and of course, I liked the attention and the music. I remember packing several in my big denim purse for the long car rides my family was fond of taking. I could sit for hours in the back seat with my clutching the Sony Walkman ears pressed tightly into the headphones. I didn’t want to miss a single word or lyric and interpret both its meaning and his reason for choosing it.

But sadly, I didn’t have the same love for the boy behind the boombox as he had for me. We parted ways shortly after I went to college. While he didn’t steal my heart, he certainly added a lot to my life in the way of making me feel special, beautiful, and worthy of someone else’s love. And, of course, the music is a soundtrack that will never die.

As for the mixtapes, I don’t have any reason to keep them – in the name of posterity. While I love nostalgia, there is no reason for me or future generations to revisit my past relationship with this person—who is now happily married, as am I.

Mom and Dad, I commend you for restraining yourselves from listening to those tapes, and you have my permission to toss them immediately. I’m not sure I would be able to do the same if I found my daughter’s teenage angst mapped out in front of me.

Oh, and a quick note to my kids: Be much better than I was at hiding things you don’t want your parents to see.