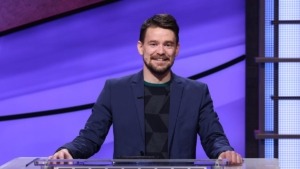 Last week, I watched the Jeopardy Tournament of Champions. Although it will never be the same after the passing of longtime host Alex Trebek, the thrill of victory hasn’t changed.

This year’s winner, Sam Kavanaugh, is a substitute teacher from Minnesota. He was holding back the tears as the host announced his $250,000 cash prize. I read somewhere that he lost his job during the pandemic, so this win was incredibly bittersweet for him.

His approach to the game was both strategic and courageous. He bet it all on the Daily Doubles and won almost every time. He also started each round at the bottom of the board with the hardest clues. Personally, I love when players never stay in one column for too long. It is much more challenging to answer the $2,000 clues in various subject areas than running the entire category.

Seriously, if you are a librarian or an English lit major, it is a given that you are going to get all the right questions in the Shakespeare category. Where is the fun and element of surprise in that?!

Anyway, back to Mr. Kavanaugh, he was pretty emotional after winning the match against two equally brilliant women. My son, Andrew, and I watched it together, and he asked me why the newly-minted champion was crying. I told him it was because these people train for this show for a long time.

Andrew gave me a strange look because the concept of training for a game show was foreign to him, so I explained.

Auditioning for Jeopardy isn’t like trying to get on The Price is Right. You need more than a fun personality and cute smile to get a spot on Jeopardy. According to Wikipedia, the online test, a 50-question qualifying exam is administered to pre-registered applicants, who have 15 seconds to answer each question. If you pass that test, you get an in-person audition where you answer even more questions and compete against others in a mock-Jeopardy round.

Potential contestants not only need to know random facts in topics from colonial America to world history and pop culture to science and medicine, but they also need to access all of that information within seconds. It is a sprint and a marathon at the same time.

Basically, to get on this game show, you have to be a hard-core trivia buff. These people are usually longtime fans of the show. They have the home game and the app. Friends and family at home support them and help them practice. I know this firsthand because when I was younger, my family helped one of my dad’s friends train, and he went on to become a five-time Jeopardy champion. He thanked us on national television, which was very nice of him.

As you can tell, I’m a fan of the show. When I watch with Andrew, I answer a good amount of questions, and he is impressed. I chalk this up to my age and interest in lots of different topics. But I’m no Jeopardy player. I’ll stick to holding my own in a trivia tournament.

Anyway, congratulations to Sam Kavanaugh. Your performance was a joy to watch and well-deserved.